View basket “Cuba, Cayo Largo” has been added to your basket.

Fly fishing or spin fishing for Taimen on one of the best Mongolian river – Tengis. Tengis river in Mongolia is an unbelievably perfect fishing destination, where you can fly fish or spin fish for taimen, the largest member of the salmonid family. Highlights of fishing in Mongolia include clear Tengis river, fish abundancy, tranquil fishing, stunning surroundings and beautiful wild nature. Not to be overlooked is the exquisite dry fly fishing for lenok trout and grayling. Fishing for taimen is only catch and release.

Mongolia is a landlocked country in east-central Asia. It is bordered by Russia to the north and China to the south, east and west. Ulaanbaatar, the capital and largest city, is home to about 45% of the population. Mongolia’s political system is a parliamentary republic. At 1,564,116 square kilometres, Mongolia is the 19th largest and one of the most sparsely populated independent countries in the world, with a population of around 3 million people. It is also the world’s second-largest landlocked country. The country contains very little arable land, as much of its area is covered by grassy steppe, with mountains to the north and west and the Gobi Desert to the south.

The taimen, the largest fish in the salmon family, is a real challenge to catch – try your luck on this tour. The average sized taimen is around 40 to 60 inches long (1m – 1,3 m) and 20 – 70 lbs (9-30 kg). Taimen is an aggressive fish that feeds on anything they can fit in their mouth, from minnows and fry to mature grayling and trout, or even small birds or rodents. The fishing can be done either with fly or spin fishing tackle. Siberian taimen, grayling and lenok are the species you will catch among the spectacular scenery of Mongolia’s exotic nature. You will stay at a fishing camp on river Tengis in the northern region of Mongolia. The fishing area extends over 100 km along the river and the surrounding area is sparsely populated. The peaceful environment offers a perfect opportunity to escape the city and relax and unwind.

A 9 ft rod for 8 or 9 wt lines is generally recommended for taimen fishing. For fly lines we recommend floating, sink tip and sinking lines (T-200/300) depending the water conditions. For lenok and grayling a 4-6 weight rod and floating line is suitable. Medium-heavy spin fishing rods 8-10′ for lure weights 15-40 g. Spinning reels or bait casting reels are recommended for spin fishing.

We fish for taimen mainly with surface flies on floating lines and sinking lines too. Streamers fished with a sink-tip line are also effective, especially in the deep pools. We will provide taimen flies; however, you should bring a selection of dry-flies for lenok and grayling. Some files for taimen: Dave’s hoppers size 6,8,10, Cricket patterns size 6,8,10, Lefty’s Deceiver size 2/0-4/0, big wooly buggers 2/0-4/0, Lead eye bunny patterns 2/0-4/0, Mouse patterns 1/0, 2/0. Good lures are 6′ Bomber Long A rainbow trout colour, Husky Pikie in silver flash, Rapala wobblers in silver and mouse imitations.

The best times to fish in Mongolia are spring, summer and autumn – our main season is June through to end July and then again from mid of August through September and October. The official season begins on June 15th, and the fishing is excellent through to mid-July since during this time the fish is most active after spawning. From mid July to the end of August there is a greater risk of flooding and if the weather is warm the taimen are less active. Through September the weather gets increasingly cooler and the taimen become more aggressive, making it the most popular and best fishing season. The fishing season actually continues all through October, but it is often too cold to fish comfortably, late season fishing in October is suitable only for hardest of anglers.

Our Tengis river fishing camp consists of tents. We have our own vehicles and experienced drivers, a highly skilled chef cook, a professional fishing guide, exclusive permission, special license for fishing. All meals are included in price.

Unhosted or hosted Fishmaster fishing trips. Fishing trips to Mongolia, Tengis river will be arranged throughout the fishing season. The packages can be booked according to the client’s preferred dates subject to availability. Anglers take an interbational flight to Ulaanbataar, meet the guide at the airport and continue with domestic flight fron Ulaanbataar to Murun. From there trip continues with 4 wd car to destination. 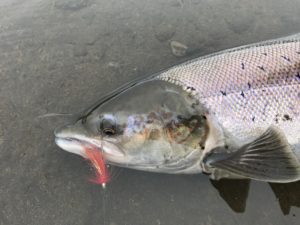